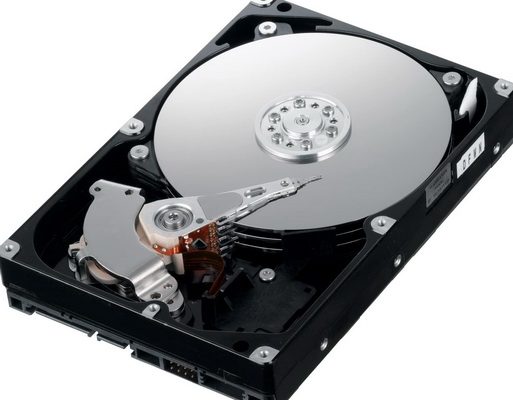 In modern drives, there is one head for each magnetic platter surface on the spindle, mounted on a common arm. An actuator arm (or access arm) moves the heads on an arc (roughly radially) across the platters as they spin, allowing each head to access almost the entire surface of the platter as it spins. The arm is moved using a voice coil actuator or in some older designs a stepper motor. Early hard disk drives wrote data at some constant bits per second, resulting in all tracks having the same amount of data per track but modern drives (since the 1990s) use zone bit recording – increasing the write speed from inner to outer zone and thereby storing more data per track in the outer zones.

In modern drives, the small size of the magnetic regions creates the danger that their magnetic state might be lost because of thermal effects, thermally induced magnetic instability which is commonly known as the "superparamagnetic limit". To counter this, the platters are coated with two parallel magnetic layers, separated by a 3-atom layer of the non-magnetic element ruthenium, and the two layers are magnetized in opposite orientation, thus reinforcing each other.[41] Another technology used to overcome thermal effects to allow greater recording densities is perpendicular recording, first shipped in 2005,[42] and as of 2007 the technology was used in many HDDs.[43][44][45]

In 2004, a new concept was introduced to allow further increase of the data density in magnetic recording, using recording media consisting of coupled soft and hard magnetic layers. That so-called exchange spring media, also known as exchange coupled composite media, allows good writability due to the write-assist nature of the soft layer. However, the thermal stability is determined only by the hardest layer and not influenced by the soft layer.[46][47]